Leaders Have the Power
to Remove Them All! 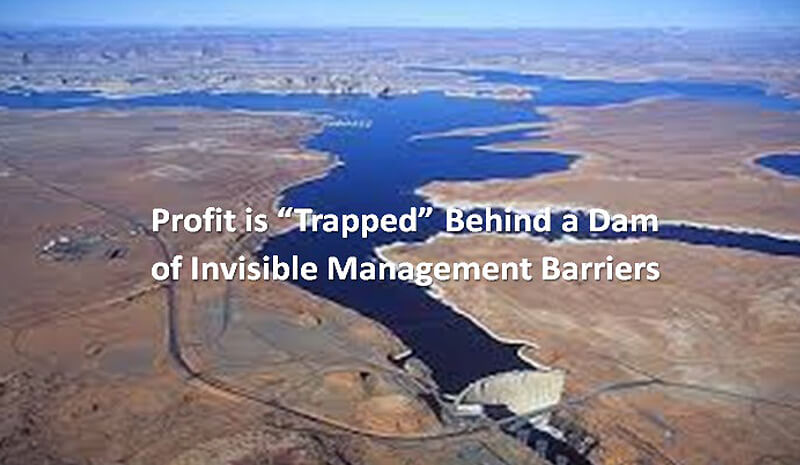 A MILLION-DOLLAR QUESTION About CHANGE

A century ago during the time of Henry Ford, simple measures were taken on the assembly line to control quality. As the decades passed, methodologies for change became more complex, moving from process measures to TQM and continuous improvement in the 60’s and 70’s to Six Sigma in the 80’s and Lean in the 90’s. Today’s methods are the most complex, technically sophisticated and expensive in history, but they still often fail to deliver or sustain the expected result.

The answer to this question is worth MILLIONS OF DOLLARS! It involves the common barriers shared by all companies regardless of company size, product, or service… barriers NOT ADDRESSED by change initiatives. If you know how to remove these barriers, you can achieve “best possible” performance, maximize profit, have a great corporate culture, change faster and perform circles around your competition. How do I know this? Because of what I learned in my optimization work with companies and my 3-year barrier study…

My Unique Study of Management Barriers to Change and Optimization

Several years ago, I began recognizing patterns as I worked with people in all management levels. All of these patterns involved management – patterns in thought, patterns in behaviors and patterns in choices that made the difference between success and failure with change and optimization. I began studying these patterns because they made everything harder to do and because there were always losses associated with them, sometimes significant losses that could have been captured or avoided… but weren’t!

Why is this important? As long as the losses continued, companies COULD NOT ACHIEVE their “best possible” performance, even if they bought new equipment and systems to achieve optimization! Stopping the losses involved understanding the root cause of the losses.

To understand the root causes, I had to step outside my paradigms about change and optimization. I used out-of-the-box thinking to understand the dynamics at work; my journey was exciting and the insights I gained in my study gave me the answers and strategies I was looking for! The following sections summarize just a few of my observations and insights:

“…THERE WERE NOT 20 REASONS WHY WE COULD NOT MAXIMIZE PERFORMANCE. THERE WERE NOT 10 REASONS. THE SAME 4 REASONS WERE THE ROOT CAUSE OF EVERY FINANCIAL SHORTFALL AND FAILURE TO CHANGE… ALL CAME FROM THE SAME SOURCE… FROM INSIDE THE MANAGEMENT SYSTEM.” Kay Sever speaking about Barriers to Change and Optimization at a Mining Convention in 2013

As I stated in the above quote, there are four kinds of management barriers… the first three types of barriers “hide” potential profit, “divide” people that need to work together to capture potential profit, and “hinder” change. These barriers form a kind of dam that traps potential behind it. If management teams know how to recognize and remove these barriers, they are empowered with information that forever changes their perspectives and ability to influence performance, change and profit generation.

NEW DISCOVERY: During my barrier study, I discovered a fourth kind of management barrier linked to management choices that SIMULTANEOUSLY affects profit, culture and change. I call these barriers “MOABs” (Mother of All Barriers). When management teams learn how to “manage their MOABs”, they remove the final source of “improvement sabotage” and move to a level of trust, collaboration and credibility that few management teams achieve.

I grew up in Indiana and remember listening to the Indianapolis 500 on the radio every year with my family. I still follow the race and even watched it in Lima when I was there on business. One year during the race, I realized that change could be like racing…

In auto racing, car owners invest huge sums of money to create the opportunity to win the race. Pit crews train to Six Sigma levels of excellence. On race day, if there is any obstacle on the track, people run out on the track to clear it so the cars can maximize their speed and win the race. In racing, NO BARRIERS ARE ALLOWED!

In companies, we invest millions of dollars in equipment and systems with the intent of “winning” for shareholders. But here’s the difference between racing and change… we start change without removing our barriers. Instead, we hope that barriers will “disappear” during the change process, which doesn’t always happen. Barriers linked to process changes disappear when process improvements are made, but barriers created by management patterns do not.

REMEMBER: Management barriers have NO NATURAL ENEMIES… they must be intentionally removed!

Before working on site, I have to complete Hazard Safety Training just like every employee. I welcome that training because it increases my awareness about hazards in the moment… things I might not be looking for when I am thinking about equipment, processes and management’s challenges. The last time I completed this training, it occurred to me that hazard training for safety is very much like barrier removal training for change.

People get hurt in the workplace because they don’t recognize a safety hazard or don’t take action to avoid or remove a hazard.  Hazard training raises awareness of potential dangers and helps people recognize them so they can take preventive action.

In the midst of change, hidden barriers work behind the scenes to sabotage your efforts to increase profit, improve corporate culture or change faster. If you know how to recognize these barriers, you can take action to avoid or remove them so they won’t hide or steal profit, won’t divide people and won’t hinder change.

People’s health and lives are at stake when they are not working safe. People’s “livelihoods” and organizational health are at stake when companies are not “changing” safe. Hazard training for safety gives people “power” to avoid and remove safety hazards in the workplace. Hazard training for change gives management teams “power” to avoid and remove barriers that sabotage their efforts to change.

All rockets before the Saturn V were two stage rockets… one blasted off and the other orbited the earth. Until the Saturn V rocket was invented, our astronauts had NO WAY to escape earth’s gravity. The third stage of the Saturn V took the astronauts to the Moon and back. When I stood under the Saturn V at the Cape Canaveral Space Museum, I realized that change and the Saturn V had a common theme… 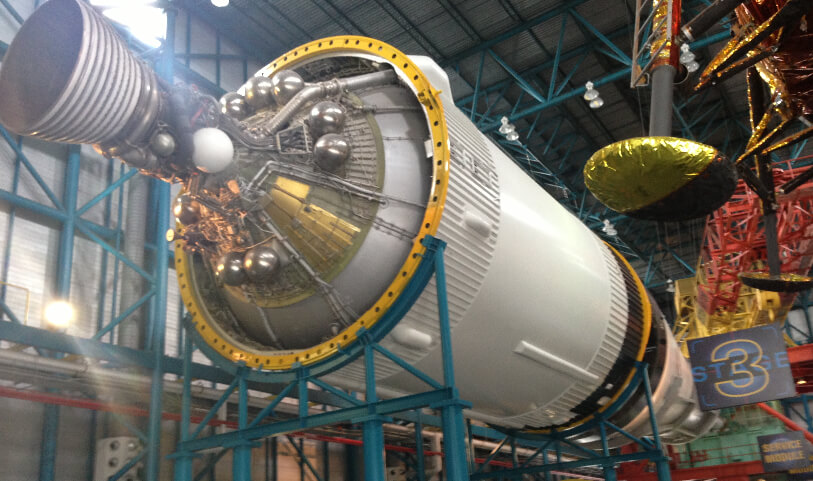 Many experts would say there is one stage to optimization… invest millions of dollars in new equipment and systems designed to take the bottlenecks out of the production value stream. When the equipment goes live, performance is tracked, ROI is reported and optimization is considered complete.

My optimization approach DOES NOT REQUIRE new equipment or systems. Instead, the goal is to expose and convert existing profit potential (i.e., dollars left on the table) to reported income. I believe there are THREE STAGES to OPTIMIZATION, one for assets (Stage 1), one for the organization (Stage 2) and one for management (Stage 3). If the optimization scope only includes Stage 1, overlooked organizational and management weaknesses will cancel out some of the gains made by Stage 1. If the scope includes Stages 1 and 2 but excludes Stage 3, overlooked management weaknesses will cancel out gains made by Stages 1 and 2. Millions of dollars of profit potential can be at risk if all three stages are not included in optimization efforts.

Stage 3 optimization work involves management’s role in BARRIER REMOVAL. It CAN’T BE SKIPPED… if it is, hidden losses will continue and sustainability will NOT be possible.

In football and other team sports, people unite to achieve a single goal: winning. Plays provide strategies to beat other teams and each player has a role in executing those plays. The best teams have winning strategies and players who care more about winning than they do personal recognition. Have you ever considered that change can be like sports…

Would this really happen in professional football? If it did, it would only happen once because the quarterback would be fired for making this choice. This scenario rarely happens in sports, but it happens in companies more than it should. When managers care more about their departments than the needs of the value stream OR when they have disagreements and refuse to work together, it’s like they are playing on opposing teams! These examples involve choices that cost companies money and create a weak corporate culture. The losses linked to these choices are never calculated!

The following audio contains insights about barriers to change and optimization that I shared with several hundred people at a large mining conference. In it, I talk about why companies fall short of the performance they are capable of achieving and reveal some of the management barriers that are to blame. This information and much more is included in MiningOpportunity barrier removal training sessions.

The Next Logical Step

As I progressed in my study, it became obvious that the secret to amazing performance and fast change lies in an understanding of what is holding us back and our ability to “clear the track”, not in pursuing change in the midst of barriers, hoping for the best result. This is a very different way of looking at change! It is also a VERY DIFFERENT WAY to MAKE MONEY!

It was time to fill the 100-year-old gap in change methodology with a system designed to give management the insights, tools and tactics to maximize earnings, change the culture and “escape their barriers”! Its content would:

It’s Time for YOUR LEADERS to become DEMOLITION EXPERTS!

It’s Time to CLEAR THE TRACK so you can WIN THE RACE TO OPTIMIZATION!

It’s Time to ESCAPE THE BARRIERS that are HOLDING YOU BACK!

OPPORTUNITY: The only element with an infinite atomic number and weight. An odorless invisible element defined as a hidden or substandard set of circumstances in business that, when not acted upon, creates invisible losses that reduce profit. These losses can be eliminated by management when linked to beliefs, behaviors and numbers that drive the corporate culture, yielding a desirable green substance found in financial institutions.